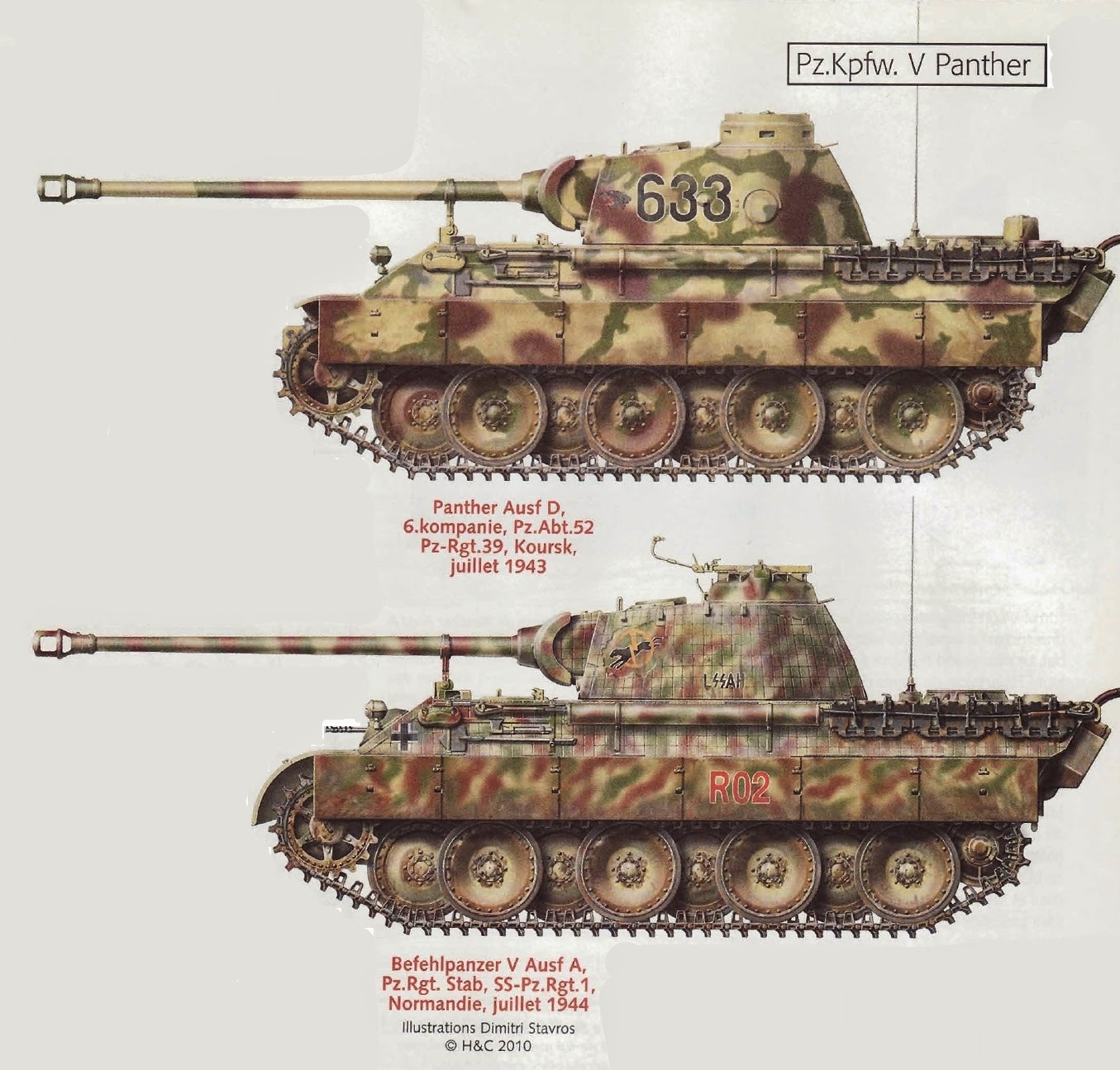 These are the main identifying features for an Ausf D:

These are the main identifying features for an Early Ausf A:

NOTE: The best way, in my opinion, to tell an Early Ausf A from an Ausf D is from the Cast Cupola, the periscope for the loader on the turret roof and the lack of a communication hatch on the LH side of the turret.

The main identifying features for a mid to late Ausf A:

The Panthers with the new cupola are early A´s.

The Last Panther D´s produced in August and September 1943 had:

no smoke grenade launchers
no communication port in the left turret side
rain shields on the hatches
some had the armored snorkel hatch
only one Bosch headlight
MG ring on the cupola
rain shield on the mantelet (gun binocular)
new road wheels with 24 bolts introduced in Aug.
Zimmerit introduced in Sept.
new track introduced in Sept.
heat shields on the rear stowage biens
one periscope (Winkelspiegel) on the right turet roof side
They all had the standard Panther D cupola.

Differences between Panther D and A

Prior to Tom Jentz's work, vehicles combining: A. Cast cupola and B. Letterbox bow MG slot were usually mistakenly identified as late D's. Again according to Jentz, the primary differences between the D and A came down to two primary changes, both in the turret of the Panther A. First, the bulge in the turret front upon which the mantlet was mounted was re-shaped. In the A, it was thicker and more rounded and there was a semi-circular dish-shaped central contour on its sides. The D had a flatter bulge, and an almost s-shaped ridge on the sides of the bulge. Second, the loader had a periscope mounted on the turret roof. Basically, just about everything else was subject to some mixing on the assembly lines during the transition from the D to the A (August/September of 1943). For example, some early A's received the drum cupola rather than the cast cupola. Also, some early A's had the same 16 bolt roadwheels of the D's, while others even left the factory with a mix of the two. And the letterbox mail slot extended well into the production run of the A. So, if you place your faith in the work of Thomas Jentz, you must look to the shape of the front of the turret bulge and the presence/absence of a loader's periscope to determine the difference between a Panther D and early A. Finally, there is zimmerit. Zimmerit was introduced at pretty much the same time the factories were switching from the production of the D to the A. So, you have some early A's leaving the factory without zimmerit. Then there are the photos of D's with zimmerit, but the consensus seems to be most of these received the coating when they were returned to factories for major overhauls.
Confused? Good, because you're supposed to be. That's why Tom Jentz et. al. make a living of this stuff.

One more universal difference between the D and the A was the shape of the interlocking cutout on the front of the turret sides. On the D, the "tab" was angled inward from the front, while on the A it was flat.

Just to illustrate a bit more clearly, the one piece casting which formed the front face of the turret was altered quite extensively internally in regards to the gun trunnion mounts. The A version is more robust and requires less machining-the mantlet itself is also approximately an inch wider than on the D.
Posted by Mitch Williamson at 12:26 AM

Email ThisBlogThis!Share to TwitterShare to FacebookShare to Pinterest
Labels: Tank